Ahhh, wizards, those mysterious weavers of magic, those glass cannons of RPG fame, those pointy hat sporting, dress wearing, broomstick soccer playing, making some limey tart a multi-billionaire figures of fantasy and folklore.
Mr. Gary Gygax and Mr. Dave Arneson forever cemented the imagery of wizards into our minds with their little game, you might have heard of it, just a trifling thing, Dungeons and Dragons and in so doing completely bollocksed the whole wizard concept.
Thanks to these two gentlemen wizards in popular media, especially gaming, are woefully ill-equipped to defend themselves from aggression.  They can't use/don't carry swords.

Swords are common in fantasy, perhaps far more common than they ever were in history.  It seems that the default weapon of any European-inspired fantasy world is the long sword.  By this I mean that not only is the long sword the 'go to' weapon for uninspired DMs and fantasy writers, but it is also the baseline for 'damage' calculations.  DnD long swords, for example, have always been 1d8 damage, which is the same as the hit die for a 0 level human 'commoner'.  Thus this weapon is dangerous but not some WMD of Medieval proportions.

So common is the long sword in fantasy lit/gaming that even thieves and bards could use them in 2nd edition AD&D.  Yes, friends, the sneaky sneaky gits and the poets could swing long swords like a champ, but not the wizard.  Why?  Oh, good question.  According to the DnD guys it is because a wizard spends the majority of his life studying the arcane and getting little exercise, so he doesn't have the time to learn to use swords or wear armor.
Uh huh.
It's actually a misguided attempt at 'balance'.  See, the magic guy can summon fire without flint or tinder so he doesn't need a cool sword.  These guys also made sure to limit that fire summoning drastically.  So that famous scene from Monty Python and the Holy Grail...the one with Tim...

Well that just won't happen.  Tim doesn't have that many spells per day.  Or maybe he does and he just used them all up being impressive, which is why he doesn't help with the vorpal bunny. (Shite, ubernerd alert, I just used 'game logic' to explain something unrelated) 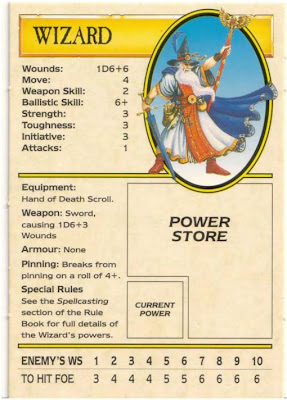 Now elves have long been candidates for the multi-class fighter/mage role, which means of course that they get to have more 'hit points' than a wizard and use fighter weapons and can fight well enough and still throw a fireball when they want.  Not the poor humans, nope.  Well sod that, I say.  Warhammer gave me a wizard with a sword and for that I thank them.
Ahh, yes, the original badass in a dress with a blade.  Seriously, look at this guy.  He went by many names including Mithrandir, which is Sindarin for 'Elderly man with whom , emphatically so, it would be most wise for you to not fuck'.

And here's one more, from Wizards, Warriors and You, just to illustrate MY point.

A wizard with a sword is a wonderful thing.  Let go the old, outdated notions of wizards being restricted and let the swords swing freely.  It all comes down to game system, I know, and the game systems that realize that the wizard does not need 50 penalties to make up for his 1 advantage (spell casting) get my vote.  Especially since those damned clerics seem to just cast all day wearing armor.  Ah yes, wizards and armor...well, that's for another time.  A simple system like Warhammer Quest offered (and Advanced Heroquest before it) or simply realizing how foolish it is to lock a 'class' out from a weapon that is being treated as something as commonplace as a baseball bat in modern America, is the solution to this irrational prejudice against spellcasters.  For Gygax's sake, haven't they suffered enough with their low hit points, poor combat profiles and less than manly dress code?

Now in your average MMO this is all pointless as wizards are simply nuke machines that lob distanced damage spells or control battlefield conditions and use some sort of recharging mana system.  They don't need swords.  But then most of those games are shite anyway.

Until next time, stay lit.
Posted by Rook Wilder at 8:26 PM 4 comments