As with Howl-O-Scream, Busch Gardens puts on a seasonal celebration for Christmas that they call Christmastown.  Christmastown opened on the Friday after Thanksgiving and like a Black Friday sale at your favorite electronics superstore, it was packed to the limit in a short time.  As with Howl-O-Scream the park had to close the front gate due to reaching capacity.  Most of the rides are closed during Christmastown. During Howl-O-Scream the water rides are closed but the roller coasters and such stay in operation.  With Christmastown a few more coasters are closed to make ready for the off-season and some of the carnival games are replaced with crafts and merchants, some local and some from out of state.  This is pretty cool, really, as I support small businesses and like to see a thriving cottage industry...yeah, I used to go to ren faires...you wanna make something of it?
Pardon my misplaced belligerence.  Please come with me and enjoy my poorly snapped photos of our family trip to Christmastown on the day after Thanksgiving.
We were still sated from our huge meal of roast boar's leg and venison sausage cornbread stuffing, cranberries, roasted vegetables, deserts and chicken.  We needed a good long walk.  We set out in the SUV around 1:30 PM and headed up to Williamsburg, normally a mere half hour drive, but we hit massive traffic that slowed our trip.  As it was we arrived at the parking lot gate around 2:30 PM with the park proper opening at 3:00 PM.  Once we had gotten past baggage check and into the gate it was 3:15 and things were open for business.  We started in England, as that is the entrance and made our way toward the Festhaus for a bit of dinner.  Of course that is not as simple as it sounds as the Festhaus is on the complete opposite end of the park, meaning we had to travel through other locations, which you can see in the pictures below: 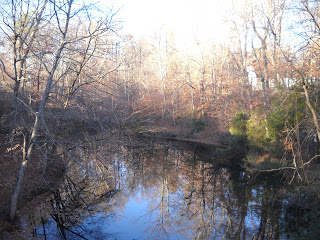 A simple stream in fall.  This is past England and Scotland and heading to Killarney. 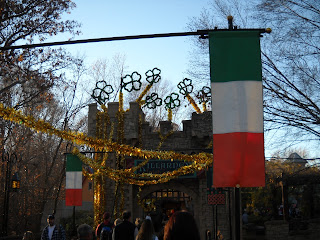 The Killarney gate as seen for Christmas.  I admit that Killarney at Halloween seems more appropriate somehow. 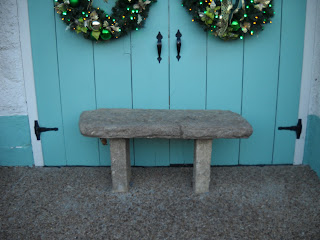 I've never, to my knowledge, noticed this bench before.  Perhaps it is because there has usually been more to distract me.  I believe this is chunk of Arsehenge, very famous in the British Isles. 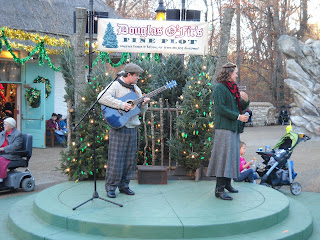 The Irish carollers performing Greensleeves.  Or at least one of them is.  The young lady announced the tune, then let the guitar player play for something like 2 minutes, finally joining in as I walked off, bored. 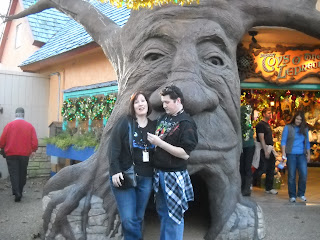 In case you are wondering, I'm looking at a penny I had just smashed in that shop behind the tree. 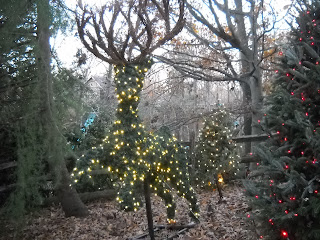 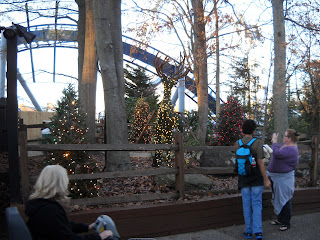 Another shot of the "New France" decorated flora.  New France (Canada) is already a rustic, trapper, smokehouse sort of place, so this feels very 'American'. 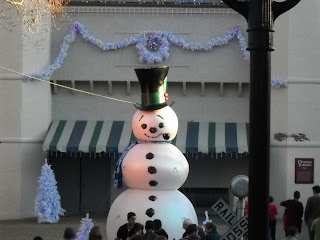 If you've read the Celtic Pumpkin Howl-O-Scream articles you no doubt recognize the entrance to France.  Where once stood a giant Grim Reaper now stands a giant snowman, smiling and violating the park's policy on smoking in other than designated smoking areas. 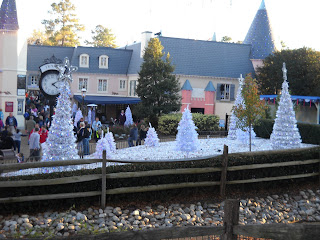 This is a shot to the right of the snowman (as you face it) where the really cool hearse was during Halloween. 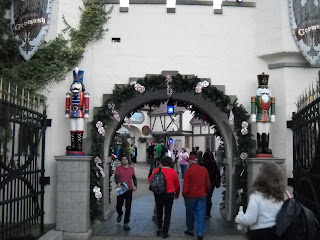 Ahh, Germany.  The Germany sections are my favorites, I admit.  Here where the vampires greeted you during October we now see steadfast Nutcracker Soldiers.  I like nutcrackers as they are militaristic and have an old world charm.  Plus they remind me of parts of my childhood.  In the Germany section there is a store that sells them, along with steins and clocks...but more on that below. 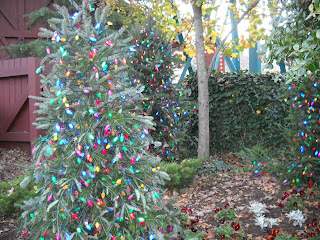 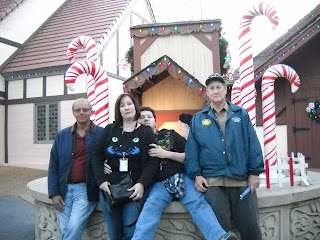 Family photo.  Not pictured is my mother-in-law, whose addiction to snapping photos meant that she is the one holding the camera.  I'm trying to move so you can see the elf back there sawing on a piece of wood. 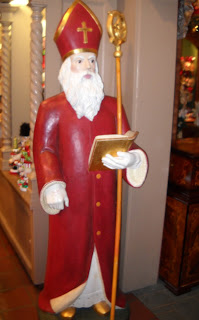 I mentioned the store that sells nutcrackers and clocks and such.  The picture above and the two below are inside the shop.  It is three shops linked together internally, one selling nutcrackers and smokers and with a dedicated Christmas ornament shop in the back; one selling clocks (cuckoo and otherwise) and one selling steins and hats.  Inside the nutcracker shop, at the very back, is the ornament room, flanked by two representations of Santa.  Above we see Saint Nicholas, the Bishop of Myra, a patron of children, thieves, whores, sailors, and various other things. 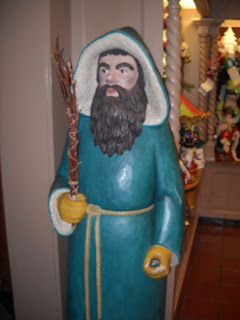 And here is the rustic fertility figure, a sort of Green Man Father Christmas, that stands opposite St. Nicholas of Myra, and represents the other of the great Santa components.  The Christian and the Pagan, standing face-to-face, guarding the Christmas room.  I don't want to challenge beliefs and notions here, so moving on... 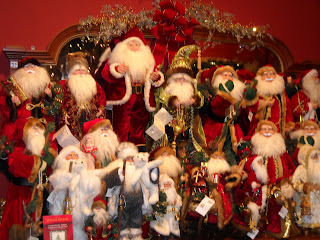 A surfeit of Santas.  I like the variation with Old World, New World and others. 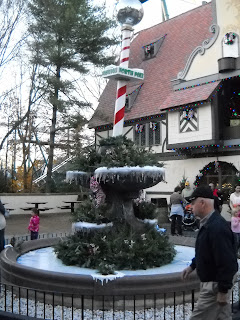 The North Pole in front of Santa's Workshop 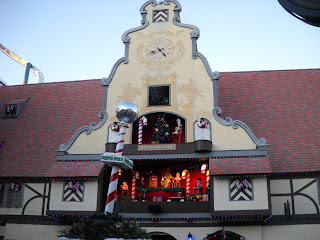 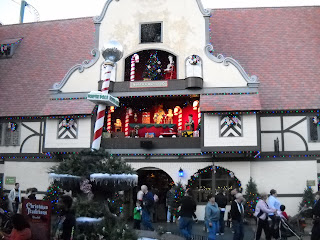 Inside you can sit on Santa's lap, if that's your taste, and times being what they are... 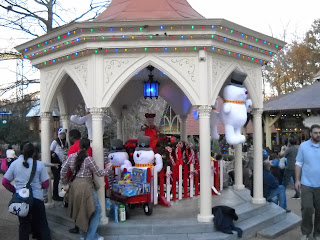 Buy a lollipop, win a Frosty.  If you are lucky.  I meant to take a shot for Frau Punkinstein because she likes snowmen.

So that's part 1.  It is still daylight and, much as we saw with Howl-O-Scream, we haven't made it to the Festhaus yet.
Please do check in for part 2 and keep your Yule Log lit.
Posted by Rook Wilder at 6:47 PM 0 comments

Whew.
The roast boar's leg was amazing.  My wife's efforts (and my own, however small) did not go unappreciated.  We had to marinate the leg overnight in a red zinfandel and spice mixture, then score it and clove dot it, basting throughout, but the meat was tender and succulent.
Along with this we had cornbread stuffing with venison sausage in.
A bread pudding (normally I find vile, but again, Frau Punkinstein has magic cooking powers), a chicken and dressing (made by my father in law), deviled eggs and some watergate salad (by my mother in law), a great pineapple 7-up cake by the ever-stoic Rob, and some other vegetables we put on the table.  My wife's cranberry sauce, which she always makes herself, so it is sweet and tart and delicious.
And my dad came to see us, but he made a trip to Gatlinburg, Tennessee first to provide for me a personal favorite I never get:
Fried Apple Pies!  Obtained from the Apple Barn in Sevierville, TN.  Oh, man...
http://www.applebarncidermill.com/DirectionsWEB/webcart_static.php?file=static_comeVisit

So all in all, it was a good day.
Today we are going to Busch Gardens for Christmas Town's opening day.  I will do a report over on Jul Pumpkin later, when I have pictures and something to report.

Hope you all enjoyed your feast.
Posted by Rook Wilder at 7:54 AM 5 comments

Today has been a day that mixes sadness with exhaustion.  Today I took down the last of the outdoor decorations and stowed them in the attic.
All that remains is Chauncey, his crows, the maize and the Harvest sign.  Whew.  I am sweating.  It is warm in Tidewater today and the attic even more so.

The lingering fall decorations will serve as a happy reminder of the Halloween season as we head toward the gorging season.
All hail the wild boar to come!

Oh, and Frau Punkinstein purchased a bag of cranberries today at the grocer.  We don't do the stuff from a tin.  Not on a holiday, at least.

I kept my pumpkins lit for 5 solid days this year.
Ha Ha!
Posted by Rook Wilder at 4:01 PM 4 comments

I am betting that question made no sense to you.
I will elucidate.

Frau Punkinstein and I want to do some gaming with some friends, but we are not sure what to play.  That it will be a Savage Worlds game is almost certain, but which one?  Or will it be a homebrew?
Frau Punkinstein loves steampunk and clockpunk, but has said she is open to anything as long as it isn't sci-fi, flying around in space.
No space pirates then...right.
I am in a cowboy mood thanks to Hell On Wheels and the usual bio-rythmn cycle that brings me around to cowboys at regular intervals.  Deadlands has steampunk, clockpunk, mad science, monsters, zombies, is a western game by default, even has magic.  What more could you want?
Oh, you want a mech fighting against ninja assassins and dragons while a wizard faces off against an eldritch horror and the cleric holds back the zombies?
Yeah, it's got that.  The mech is steampowered, driven by an insane scientist, the ninjas are, well, ninjas, the dragons are either giant gila monsters or sea monsters, the wizard has exploding cards in one hand and a sawn off shotgun in 'tother and the eldritch horror is the spawn of a gigantic worm that lives underground in the desert, and the cleric is a tough-as-nails preacher and he's holding back the zombies (who are undead rail workers) with his righteous faith and a stout piece of hickory.
Nice, yeah?

But I've also got an idea for Ghostbusters...and it just might work.  The equipment is in the Horror book, and I can certainly whip up a few extras...
So now I don't know.

Could always go superheroes...but is that what people want?

Have to check with my mate, Will on this one.  But he's pretty much "open to anything" on this point.
Posted by Rook Wilder at 8:44 PM 2 comments

Frau Punkinstein has put in the order for the Thanksgiving menu.
Leg of wild boar, venison sausage, some sides.  She does a great cranberry sauce (not from a tin, I assure you). 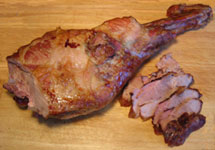 We have ordered from Broken Arrow Ranch, which you can find at their WEBSITE.
I love the pig.
Piggie piggie piggie, oi!

Just the notion of wild, not raised in the deplorable conditions of the modern pork industry (thank you Britain for that, really), pork fills me with excitement.  The venison is just a bonus.

Now I am an animal lover...but also an animal eater.  It's all circle of life and whatnot.  It's not like the boar is my totem or anything.  But I do love some pig.
On a side note: Hell On Wheels premieres tonight on AMC.  I'm quite excited about it.  Since I saw the first commercial I have wanted this thing to premiere.  I do enjoy Westerns (and even more Weird Westerns) and this looks a gritty western to me.  Let us hope it does not disappoint.  I'll do a little review when I've seen enough to know.

The Spirit of Halloween Passed

Had to take down some of the inside decorations tonight.
And I had to mow the lawn.
Our Jack O Lanterns have been disposed of.  This is sad, but since mine was starting to look like a toothless old man, it was time.
It is sad, I admit it, but I enjoy the Thanksgiving and Christmas seasons as well.
I am beginning the transition over to Jul Pumpkin, where I will chart some Yuletide thoughts and ideas.  Not that I won't have things to say on the CP, but it usually becomes more "things that are annoying me" or stuff like that.
Then deep in the winter I will, invariably, forget how hot and sticky summer is, start missing the beach and become PIRATE PUMPKIN, not that I change the name or anything.  I just end up talking lots of pirate bollocks.
So see you on the Jul Pumpkin, I hope and stay tuned for interesting musings here on the CP.
Posted by Rook Wilder at 10:22 PM 4 comments