Son of a bitch, mates!  Why was I not told about this game? 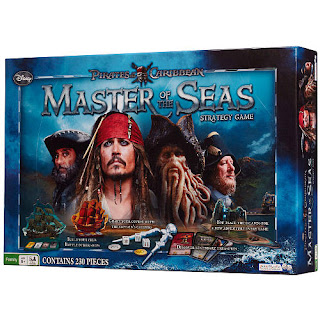 I love me some pirates.
I'm excited about many things, including the new Ghost Rider film coming out and Aquaman comics and stuff, but I can't resist pirate stuff.  Since I was a wee landlocked tyke I've been a pirate at heart.
So when I found out this game existed only yesterday I was overcome with glee, but then sadness.  Because I didn't know about it.
Look at the bits (230 of them): 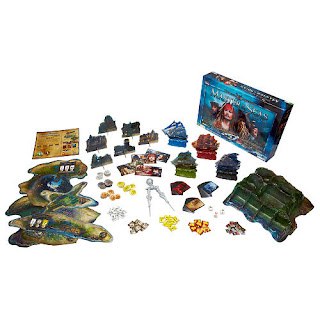 I admit it; I love a game full of bits.  Miniatures, cardboard standies, dice, little coins, troop counters, plastic canons, from RISK to MONOPOLY to those complex AVALON HILL games, I love a game box full of fiddly bits.
4 Captains competing for piratey glory.  I'm likely to pick Davy Jones or Blackbeard.  To be honest I'm not a big Jack Sparrow fan.  I like the character well enough, but I'm no gushing girly fanboi.  And Davy is badarse with his cephalopodian noggin.  And who couldn't love Ian McShane as Blackbeard?
I'm even fond of old Hector Barbossa as Geoffrey Rush is a really fun actor and seems to enjoy the part.
Check out the link below if you'd like.  Or look it up on Board Game Geek if you are inclined.

My beloved Frau Punkinstein gave to me, for Christmas, the latest release from the Misfits, Devil's Rain 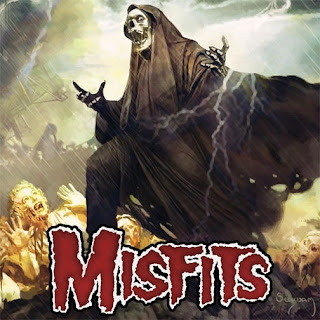 In short, it kicks ass.
My Misfits package included an all over T-shirt of the cover, a limited edition vinyl pressing of the album and a digital download of the same.
If Bruce Willis has taught us anything, it is that old dudes can kick ass and sell media.  The idea that Jerry Only and company are gentlemen of middle age and still packing houses (with fans of all ages, I might add), makes me happy to no end.
Is it good?
I like it.
I've long enjoyed the Misfits for their pioneering of the horror movie themed, somewhat kitschy but never cheesy, punk rock vibe.  Since Michale Graves left the group back in 2000, Jerry has been the main vocalist as well as the bass player, taking the 'Fits from a 4 man punk outfit to a tight power trio.
Now I've read reviews that say that people don't like Jerry's vocals.  I do.
I liked Glenn Danzig's vocals (and liked them again in his subsequent post Misfits works) but then I'm the world's biggest Elvis fan, so how can I not like Glenn's vocals.
SIDEBAR- For people who don't realize it, I'm going to say it now, Glenn Danzig channels Elvis.  Always has, and for that he is a great vocalist.  I'd love to hear Glenn doing some Elvis tracks. -SIDEBAR
I liked Michale Graves's vocals as part of the Misfits and in his subsequent works (and I support the whole Conservative Punk thing).
I also like Jerry's vocals.  Just because it is not Glenn Danzig does not mean it is not The Misfits and shit, even so, things evolve.

So, hell yes, new Misfits.  I'm happy with it and recommend it.

Until next time, keep your pumpkins lit.
Posted by Rook Wilder at 8:29 PM 0 comments