My pistol is loaded, I shot Betty Crocker, Deliver Colonel Sanders down to Davy Jones' Locker... 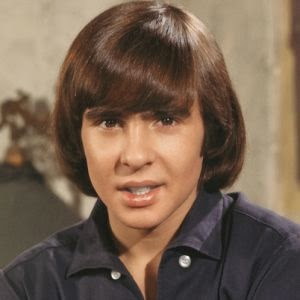 No, not that one.  He's just the ship's Monkee.
The Davy Jones I am talking about would be from the Pirates of the Caribbean film franchise.  I've read and heard many disparaging things about Dead Man's Chest, the second of the POTC films.  I admit it can be a bit awkward as it was written solely to create a bridge to reconcile turning a single film into a three picture deal.  In some ways it is like The Empire Strikes Back, a film that sets up the larger narrative, pulls the original into an epic story, and ends with a down note of the heroes at their lowest point.  It's a good film in its own right.
The big villain of the film was, of course, Davy Jones, a mishmash of aquatic creatures, a perfect symbol of the devil of the deep seas that Davy should be. 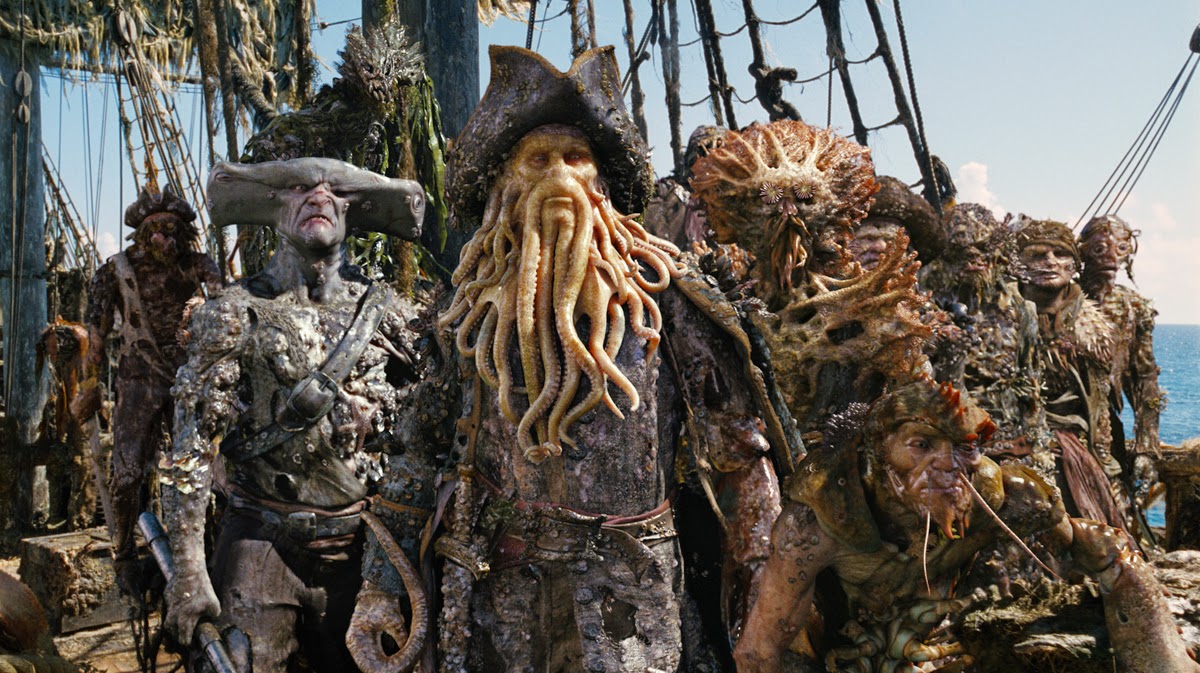 I truly liked the character's design and Bill Nighy's performance.  His entire crew was a fun concept, I thought.  With a ship that can travel above and below the waves and a pet kraken, Davy was a formidable foe for the heroes to face.  He was also very much an icon of the sea itself and his crew ran the gamut from comical to symbolic of the dangers of the sea.  We accept that POTC is in its own alternate universe from history by the very presence of magic and events that did not occur in our own world's timeline, yet we also accept that elements of our own world and its legends are a part of the POTC universe. The Davy Jones known to sailors is popularly called a devil of the seas and a general euphemism for death at sea as in the construction Davy Jones' Locker for the bottom of the sea (in this case locker being a place where geared is stowed).  You can look all this up on Wikipedia and various other locations and you will get all sorts of unconfirmed sources for the name, including Jonah, but no one has yet suggested, as I am about to do, that it is simply a way to avoid saying the name of the Devil.  Why would I suggest this?
Old Scratch
Old Nick
Old Hob
All epithets used to mean the Devil (with a capital D).
In the same fashion the English used to have words they substituted for God such as in the construction odsbodkins or egad, both used to not say the name of God in an oath or curse but still do it.  Letter of the law vice the spirit, one expects.  However there is an old belief (and it still persists today if you think about the words you are not supposed to say lest they "happen") that if you call on something by name that something will show up.  To this end people substituted other names for things, like saying Nick instead of Satan.  So why not Davy Jones in place of Devil?  Just my personal take on it, not a fact or anything.
The popularity of the POTC franchise meant that things were going to come out that traded on the imagery, or the new popularity of old imagery, such as the Pirates of the Spanish Main constructable card game (with cool little ships) who had their own Davy Jones, very much a lord of the seas.
And far more human looking as well.
Disney went with a more literal sea devil in their Davy and crew.  Davy has what appears to be a cephalopod for a head (yes, head-foot head).  At this point I am going to have to ask you to check your Cthuloid nonsense at the door.
We'll have none of it.
If we are to call everything that just happens to have tentacles on its head a nod to Lovecraft we will be stupid and shortsighted.  Besides, Cthulhu is an alien, not a sea creature.
Is Squid Head a Cthulhu nod?  Yes, I know you think his name is Tessek of the Qarren species, but the toy was called Squid Head as apparently was the character in the creature shop so deal with it or eat a big old wasabi covered eldritch tentacle.  Well he's not.  He also has no business being on a desert planet in a binary star system.  Honestly. 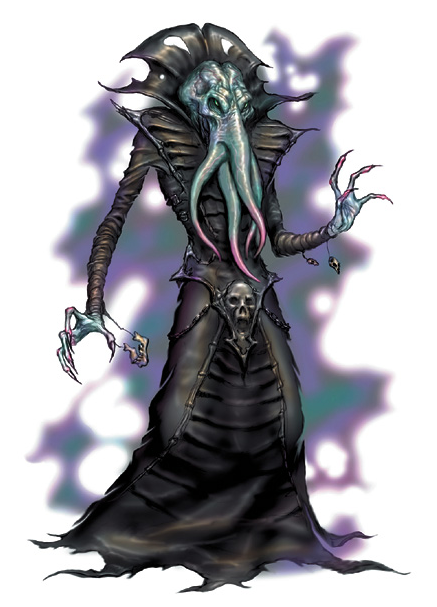 Mind Flayers, yeah, I'll let you have that one, but only because I know where the idea came from.  But only just.
Shit, I've gotten off topic a bit.  We are supposed to be talking about Davy Jones.
Within the POTC universe Davy was a sea captain that fell in love with the sea goddess Calypso, whose heart was as capricious as the seas themselves, and struck a deal to be the ferryman for those who died taking them to the afterlife.  Feeling betrayed by the thing he loved the most (the sea, poetically speaking) he cut out his own heart and forsook his sacred mission.  He was twisted into an immortal amalgamation of the thing he loved (again, the sea) and takes on crew members offering them death or servitude aboard his ship the Flying Dutchman (here we are combining legends).  His crew are twisted over time into aquatic amalgamations themselves until they finally become one with the Dutchman itself.  He's a pretty cool character and very much the ultimate version of Jack Sparrow's ideal.  He's immortal, he's a legend, and he is absolutely the sea itself. 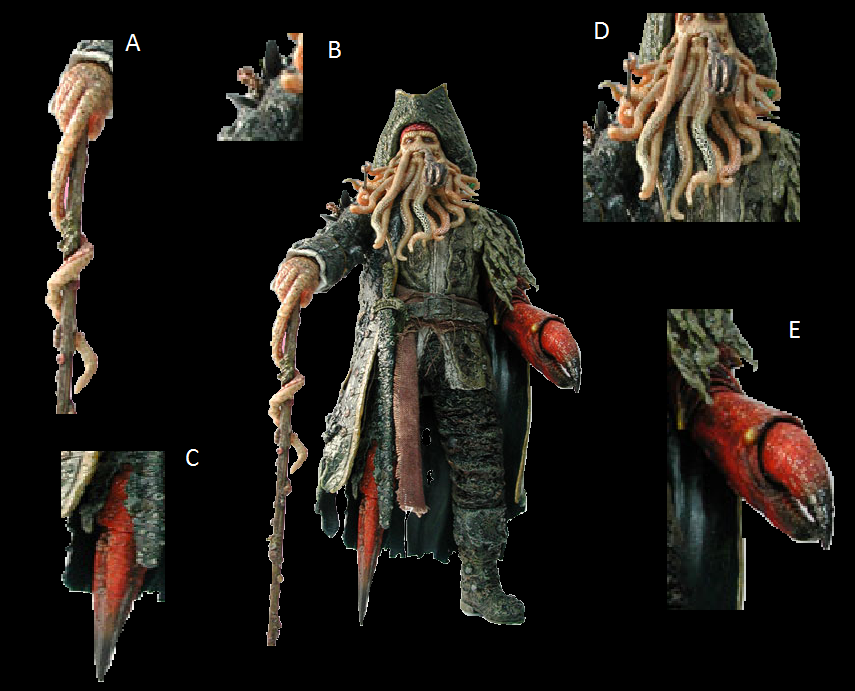 Physically the details are just amazing in the character's design.  Overall he is an imposing figure, tall and broad of stature.  He has been given a clever twist on the cinematic pirate staples of peg leg and hook hand with crustacean parts (items C and E above), and his massive beard (seen in the one scene where he is talking to Calypso and reverts to his old self briefly) has become a mass of tentacles (item D above).  Instead of a nose he has a siphon, in keeping with his cephalopod head.  Similar to his crew his clothing has become encrusted with barnacles, bivalves and other sedentary marine life (item B above).  To aid his crab leg he uses a walking stick (but seems to need no help when he is fighting Jack Sparrow) and his right hand has changed such that his fingers are tentacles as well (item A above) with an exceedingly long forefinger.  He's a big hit with the ladies, I'm sure.
I genuinely feel that Jones, and to a lesser degree his crew, were the best thing about Dead Man's Chest.  The CG work was very well done and the little touches make all the difference.  His use of his face tentacles as very functional hands in place of his clumsy crab claw or super violation finger is a great touch.  He feels totally organic in the film and very at home in his world, which is the sea.  He's also very much the POTC world's version of the legendary devil of the seas, making Faustian bargains with sailors and commanding a fearsome beast, the Kraken, to bring fear and destruction as suits his purpose.  According to the lore it was a deal with Jones that provided Jack Sparrow with his ship, the Black Pearl (risen from the depths by Jones) and as revealed fully in the third installment, he has a Locker.  The Locker being the place of torment where Jones sends people (vice his proper job of ferrying souls).  In it Jack suffered his worst torture, a desert, his ship stranded with no sign of the sea in sight.  In this sense Jones' locker is like the poetic idea of Hell brought to us by such persons as Dante.  As I said, Jones is very much an Anti-Jack while being at the same time emblematic of Jack's ideal of being a part of the sea.  Jones' Locker is the opposite of the sailor's version of Heaven known as Fiddler's Green, the descriptions of which vary from telling to telling, but are sort of the Age of Sail version of Valhalla.  One big rollicking shore leave where your money never runs out and nobody has the pox.
In the end, it is really all about the imagery in a film and a glance at Davy Jones as Disney does him up really says he's everything of the sea that is scary as hell and that is what you want for such a ubiquitous sailor's legend.
Yeah, but you are just lame.  You had all of 16 seconds of screen time and no lines.
Ah, I'm just having a go at you.  You were one of my favorite Star Wars action figures and your head came off easily so I could put it on other bodies.  You'll always be Squid Head to me.  I might even give you a post someday soon, buddy.