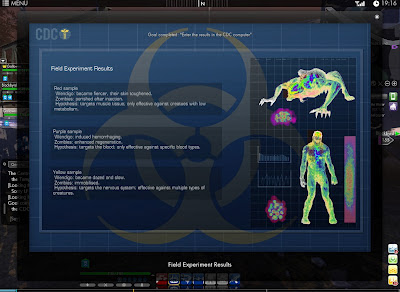 Not so much scary as just messed up...

As I have revealed I have been playing The Secret World online.  I have shared some of the creepy images I have collected of monsters in the rural Maine parts.  I now have some pictures of the monsters from the sea found on the desolate, rocky coastal parts of the island.
The game uses elements of Lovecraft and Norse mythology so far, and these monsters are examples of that.
Here is a profile shot of a Deep One.  Yes, I have used the Lovecraft name, but their overall monster name is Deep One, so I am just calling it the way the game plays it.  Fish people from the cold, deep Atlantic. 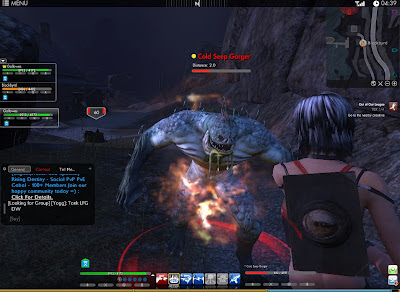 Here is a close up with Blackbyrd (Frau Punkinstein) shooting it in the fish junk with a shotgun. 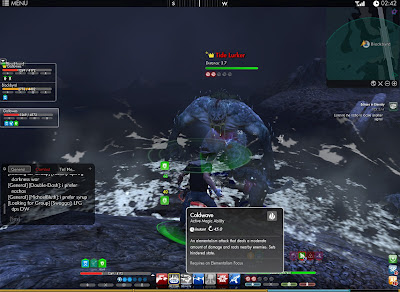 A REALLY BIG deep one.  As is the way with all the biggest, toughest monsters in an MMO, he called for help.
Bastard. 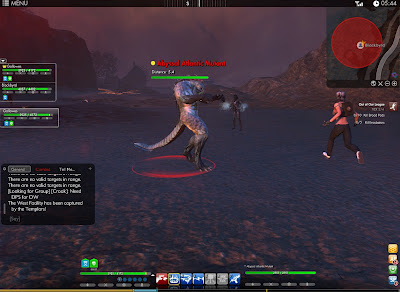 I swear he is doing the dance from Thriller.
Speaking of dancing...it's a Nordic undead pod-person Sea Witch doing that scene from Flashdance...with tentacles. 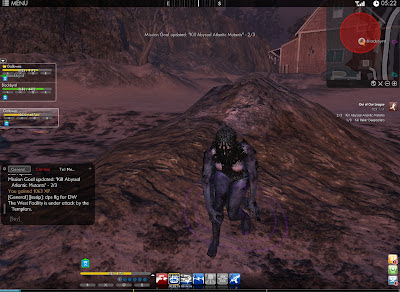 And now we see why I call it messed up.  This is an evil naked monster woman with seaweed for hair, or something.  Definite Ring vibe going on in this shot.
You have to have boss monsters.  It is a rule.  Once you get to the end of a little quest and are beat to crap you have to have an even bigger, rudely shaped monster to shaft you.  Well, it wasn't that hard.

Now that I have degenerated this into sophomoric humor and puns, I think I need to close the post.

As I continue to play The Secret World I find more and more great examples of horror stuff.  I should have a better vocabulary.  I should be able to find a better word than "stuff" but honestly it is a good word to describe this collection of oddments.
Here are a few screencaps of some of the creepy things I've encountered thus far: 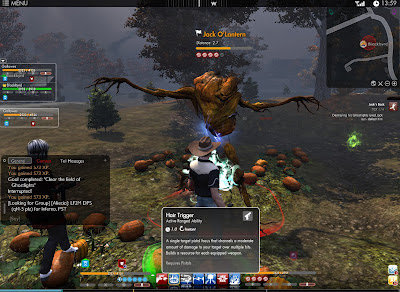 Jack O' Lantern, a demonic entity that inhabits a pumpkin patch and wreaks his havoc with fiendish glee! 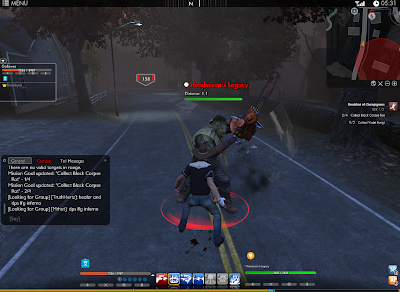 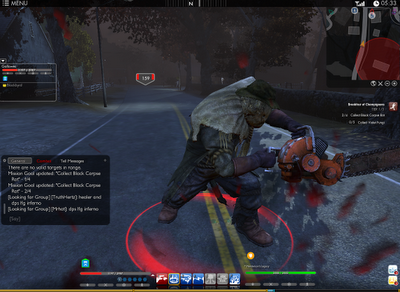 Chainsaw wielding sack-head man!  The overalls, work boots and sack-head crowd evoke the notions of Jason Voorhees in Friday the 13th Part II and any number of creepy backwoods serial killer types.  I like this guy because he also has a hat.  The hat really sells it for me. 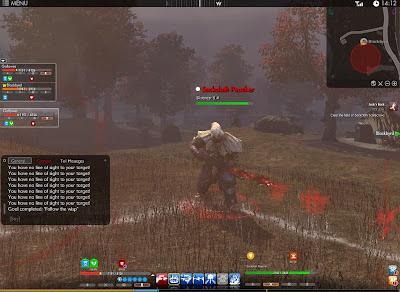 Another one of this type called a poacher.  Note the shotgun. 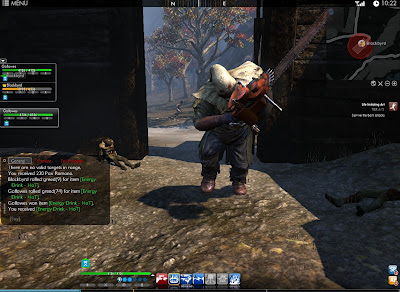 Here is one of a very nasty fellow with button eyes on the hood.  I think that is far more disturbing than the hollow empty eyes of the others. 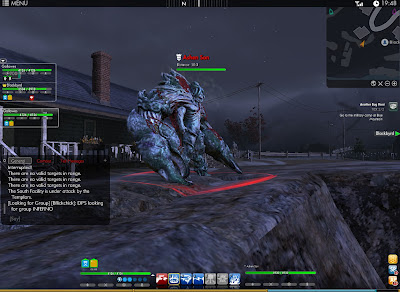 This is a weird-o fish monster thing in keeping with the Lovecraft theme.  Notice the overall crustacean form with claws, but if you look there is a humanesque figure embedded within.  Let your imagination run wild. 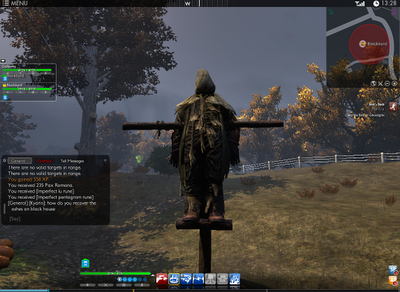 A picture of one of the sackheads, which are sometimes called scarecrows being just a scarecrow.  At no point did it jump down and try to kill me. 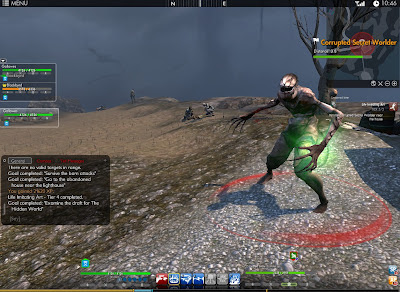 Finally this picture which is something very Tim Burtonesque.  I don't have any details.  We shot him.  A lot.

Keep your pumpkins lit, Jack-O.
Posted by Rook Wilder at 11:20 AM 0 comments

The wife and I have been playing The Secret World, an MMO with a conspiracy basis and a decidedly Lovecraftian bent to it.

I'm not a huge fan of H.P. Lovecraft.  I find his writing to be superfluous with adjectives and remote in too many ways from the mindset of the modern world.  I could say the same thing about Homer, but I have just finished the Odyssey (which I should have read back in my English Lit classes and did not, but I was familiar with the story then as well) and despite the tale being 2800 years old feels far more relevant and in touch with the modern reader.
I suppose what I don't like about Lovecraft the most is not his work but his fans.  I say this full in the knowledge that some of those fans are friends of mine; close friends, in fact.  Lovecraft created a mythos where unknowable and uncaring alien beings, some from beyond our very dimension, some that are pan-dimensional, are gods and where man is ultimately doomed should he ever seek to expand his consciousness beyond the simple banal drudgery of day to day life.  It is a faithless, hopeless universe and there can be no true heroism in it.  Yet for some reason fans of Lovecraft's work seem to ignore this singular point and focus on how bitchin' Cthulhu is.  Yes, the revel in one of the things that old Howard dredged up from his nightmares and many neuroses.  Inevitably this takes the form of games (video, board, role playing, etc.) that seem to fail to grasp the essential horror of the works from which they are drawn.

But who cares?  I am supposed to show you some scary shit, right?

So this game I am playing is basically secret societies full of people who have been given magic powers because they swallowed a glowing bee and now struggle against one another and the world to further the agendas of their august masters.  I wish I had just made that up.  The first zone is an island off the coast of Maine with a surfeit of horror movie tropes running wild...for you to kill.  Here is a picture, the promised scary shit, of an evil scarecrow that we fought last night.  The game is pretty and the monsters are well done.  I'm the one in the cowboy hat.

Until the season rolls round, keep your pumpkins lit.
Posted by Rook Wilder at 10:22 PM 0 comments

Dread and Trepidation in the Prime Time

Friends, it is with great unease and distaste that I (ahem) await the coming of Mockingbird Lane the ill-chosen re-imaging of the television classic The Munsters.
I've been following the developmental progress of M.L. infrequently and frankly I am not happy about what I see  coming down the pike.  The Munsters is a show near and dear to my heart.  I explained all of this previously in THIS post.

From what I can tell (and a big Thankyewvermuch to Tom Krohne and his blog Monsterfink's Midnight Monster Spookshow, check him out if you haven't yet, you won't be disappointed) this show is shaping up to be The Gates PART TWO-ew-ew-ew-ew (that was an echo effect, by the way).  Yes, let's follow up a failed Monster Mash show with another, nearly identical Monster Mash show.  Let's do that.
I could make a laundry list of reasons why I don't want this to happen.  Am I just bitching?  Am a nostalgia's bitch?  I will present a few of the points that, as they say whence I come, stick in my craw.  From Bryan Fuller ( creator, writer, executive producer and alleged fan of the original ), his own words:
1) "The fact that Herman is in a constant state of decay and he's married to someone who doesn't age. We get to play with all those insecurities. The fact that he was made by his father-in-law and then has to live up to those standards; he's always trying to find his own identity."
Say what?  Herman is not a zombie.  He is not in a constant state of decay.  He is, for all intents and purposes, Frankenstein's Monster.  He is alive, immortal, and powered by electricity.  He is not decaying!  He was certainly not made by Grandpa.
2) It's an ensemble, but the emotional point of view is from Herman because it really is about a father who is realizing his child is taking after the other side of the family. He has so few things in his life that are his, and his son Eddie was one of them -- and now Eddie's more like Grandpa than he is Herman.
Holy shit. Edward Wolfgang Munster was a werewolf. Is he not a werewolf anymore? That was part of the charm.

3) Audiences now don't remember The Munsters, unfortunately, because it should be celebrated. For a lot of people, this will be their first exposure to it and those of us who are familiar with it on television will be, "OK, this is another version of a great concept."
They don't? It gets play in syndication. You can purchase the DVDs. They made a sequel series fergourdssake! So if audiences don't remember this show how is it that we all know it is The Munsters and for whom is this being made? "I wanted you to enjoy The Munsters son, but never like this. I am so, so sorry. I'll call your therapist."
4) The Creature from the Black Lagoon will be like [1988's] Splash, Too: When he's wet he's the Gillman. That's one of the best makeup effects -- prosthetics -- that anybody has done, that monster costume. And when he's dry, he's a handsome guy.


Oh screw you. Seriously, eat a bowl of hickory smoked salty clown dicks and die. In a fire.

Am I taking this too personally?

Should I not wait to see it before I pass judgement?

No and no. Look, the purpose of trailers and posters and interviews and, well, hype is to get you interested in experiencing something. The trailers, for example, are there to make you want to watch the film. If you watch the trailer and then don't want to watch the film that is what happens. I don't have time, nor the desire, to experience every single thing on this earth to determine if it is "good" or not. Many things aren't, and that is disappointing. Anyway, I know what I like. I don't need to eat hippo dung to know that I won't enjoy it. I can just live without the knowledge, dig?


Finally, I just want to say, and if you need more details, or even want them, you can read the older post, that I like the Americana of The Munsters. The original show was, to me, like a Rob Zombie video. It was chock-a-block with that mythical America where cowboys drive hot rods and people don't whine constantly. I want Herman Munster to be like the classic sitcom dad of old, not some brooding, whining twat.


Until Bryan Fuller recognizes the error of his ways...keep your pumpkins lit.

This is for the public record, so should anyone ever need to know it will be written and may be referenced.