Don Antonio sat in the corner of Vito's, his favorite Italian bistro, flanked by his constant bodyguard, two muscled brutes that looked more like gorillas than men, gorillas that had been strategically inserted into expensive suits, and stared at the man who sat opposite him at the table.  Vito, a long time associate of the old man, had closed his doors early to accommodate the meeting.  It was the way of things.  Vito had asked Don Vito to protect his interests nearly twenty years before this night and Don Antonio was only too happy to oblige.  Everyone, the don had explained to Vito those years ago, needed friends in this world.  Vito had become one of the don's friends and from that day forth Don Antonio was the silent partner in Vito's bistro. Silent, as in, Don Antonio received his cut of the profits regularly and was treated as royalty at the bistro.  What the don asked was done, no questions asked.
Tonight Don Antonio had asked for the entire establishment for a meeting and Vito complied.  Vito always complied, to do otherwise would have been disrespectful.
Don Antonio sipped bourbon and looked at the man who sat before him.  He was not impressed.  If O'Connell, that fucking upstart mick, thought that his representative was of the caliber to meet with a man of Don Antonio's stature he was either as stupid as he looked or being intentionally disrespectful.  Don Antonio did not like men who failed to show the proper respect and he despised those who intentionally disrespected the rules of the business.
"What can you expect from a mick," he said to himself.
"Mister Antonio," the man said, "Mr. O'Connell says to tell you he respects your position and your influence, but that he will not give up the western territories he has acquired.  He hopes you can understand."
Don Antonio betrayed no emotion.  Indeed his face was a mask of unconcerned disinterest.
"Aldo," Don Antonio said to the muscle on his left, "what do you make of this mick, eh?"
"Seems lippy ta me, boss," the gorilla said.
"Charming," the man said.  "I'm not Irish, by the way."
Don Antonio leaned forward nearly dipping his tie into his plate of tortellini.
"Doesn't matter if you are the king of Portugal; not to me.  You are here representing that mick thug O'Connell.  You speak for the mick, you are the mick.  Capisce?  You come into my town, my territory, and you don't show the proper respect."
"I beg to differ, Mr. Antonio."
"You call this respect?  You come in and tell me that your boss is not willing to follow the rules?  No tribute? I can smell the disdain on you from here."
"To be frank, Mr. Antonio, what Mr. O'Connell said, specifically, was to tell you that he didn't give a rat's ass what you wanted.  His exact words were, 'You tell that shriveled dog's dick of dago that he can take his territorial bullshit and stick it up his fat wop ass.'"
Don Antonio lost all composure.  "Aldo, taking this fucking mick stooge into the back and teach him some manners!"
Aldo and his fellow simian were on their feet in a moment.  They grabbed O'Connell's man roughly around the throat and dragged him to the floor.  A flurry of kicks followed and the sound of cracking bone could be heard.  Vito stayed in the kitchen pretended not to hear.
"The back, you morons!"
"At once, Don Antonio," Aldo said winded and a little embarrassed.
The goons dragged their victim by his collar feeling no resistance.  He was limp and moved like a sack of flour.

O'Connell's man opened his eyes to see a bare bulb hanging from the ceiling.  He was tied to a wooden chair and expertly it seemed.  There was no room to wiggle his arms, much less work his hands free.  The room was full of shelves and supplies.  Clearly it was a stock room for the restaurant.  The two goons who had beat him stood on either side of him just in his field of vision.  The door he faced opened and Don Antonio stepped in, his massive bulk filling the entire door frame.
Bound but not gagged, he laughed.
"What's so funny?" Don Antonio asked.
"I was wondering when was the last time you saw your dick, you fat..."
He did not get to finish his sentence as Aldo's fist cut it short knocking several teeth from his jaw.  He spit the  teeth out to the floor with a gout of dark unhealthy looking blood.
"I was never much of a poet," the don said.  "I found that words were most effective when they were spoken plainly.  You could say I don't have the art, but I do love art.  I love the poetry of communication.  What I'm going to do is send a message to O'Connell using you as my medium."
Don Antonio worked on his captive for a half hour at least with the aid of his goons.  When he was done the man was hardly recognizable as a man at all.
"Whatdya think, boys?" Don Antonio huffed, wheezing as the exertion took its toll on him.  The sweat had stained the pits of his shirt and soaked his collar.
"Like a regular Picasso, boss," Aldo said smiling.
"You boys finish the job.  I gotta have a drink."
Don Antonio turned and left the storeroom clomping loudly as his overtaxed bulk traveled to the dining room.  Aldo and his companion were looking at the door as the don left with no concern for the ruin of the man that slumped behind them.

The man's flesh was all but destroyed, which was fine.  He'd only borrowed it anyway.
"Time to get to work," he said to himself.
With a shudder the life left the body, or rather the spirit shook the mortal coil, shimmering out of the body.  Aldo became aware of a sudden drop in temperature.
"Carlo, it get fuckin' cold in here or am I dreamin'?" he asked his companion.
The second goon made no reply at all.  He could not reply.
Aldo turned to his partner.
"You hear me?" he asked but when he turned to see Carlo all he could do was stare with his mouth open wide.  The thing standing behind Carlo was translucent, a grayish-bluish color and in its eyes Aldo saw Hell.
"Holy Mary mother of God," Aldo cried.
That's good, Aldo, he heard a voice say, or rather felt, as in his head, pray.  It might help your chances.  Not here, of course, but after.
Aldo never had time to scream before his life was cut short by the thing before him.

Just hit it with a stick, mate

Wizards are all about magic, right?
I mean, that's why they are called Wizards and not Warriors.  Thus the Wizard should be just lobbing magic around all day, putting a hurting on anything and everything that gets in its way...right?
Even Doctor Strange, whose powers are nebulous in their rules, doesn't do that.  So why should your little MMO/RPG Wizard do that? 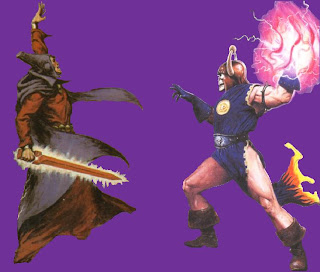 It's not even effective, really.  Prior to 0 edition DnD's Greyhawk Supplement a 1st level Magic-User really had no offensive spell powers.  No direct damage, if you will.  He was supposed to be, get ready for it, AN APPRENTICE just fresh out of his years of learning magical formula and secrets, hungry for adventure and the oh so necessary GOLD to continue his explorations into the magical realms.  He wanted scrolls, wands, tomes of power and items of arcane miscellany that could only be found in the hordes of dragons, temples of evil demon gods and the boudoirs of liches.  Like the 1st level Fighting Man he was only marginally better than a normal person but he had the potential for greatness.  Since the normal person wasn't going to be READing MAGIC or putting anything to SLEEP these small magic spells were great boons.  So what if he couldn't make things explode.

Then along came MAGIC MISSILE, the bane of 1st level Mages everywhere.  Bane, you say?  Why is that?
Okay, you got one spell.  One.  One spell per 24 hours.  You are trapped in a dungeon, no light whatsoever, no torches, no lamps, screwed as a party.  What is a more useful spell to have: MAGIC MISSILE or LIGHT?
"Hey, Androphiles the Great, cast LIGHT."
"Sorry, man, I brought MAGIC MISSILE today."
"We hate you.  We all hate you.  We've been meaning to tell you that."

When it first appeared MAGIC MISSILE did the same damage as an arrow (2-7 points) which was decent.  You could kill something with it.  By AD&D 1st edition that had been reduced to 1d4+1 (2-5), which is pretty crap.  You want to waste your one spell today for a magic light dagger?
At the same time the Magic User could carry a staff which did 1d6 points of damage.  What's wrong with hitting something with a staff?  It is better damage than an AD&D 1st edition MAGIC MISSILE and you can use it indefinitely.  Now I should point out that arrows, in the real world, are much more effective than in RPGs, but that does not excuse MAGIC MISSILE from sucking so much.

Of course the modern gamer won't have it.  Nope.  They want a magic ranged direct damage attack of approximately equal or greater value than a sword.  Because that is "fair".
MAGIC IS NOT SUPPOSED TO BE FAIR!  It is MAGIC!  What is fair about being able to disintegrate a person at high levels?
Nothing.  That's the point of magic.  This reliance on magic as the sole ability of wizards is the problem.  Stop that.
Posted by Rook Wilder at 9:47 AM 0 comments