Greetings friends, I would like to talk to you today about what I feel is wrong with this great nation, the USA, today.
Where the hell is my baker's dozen?
Where has my 13th doughnut gone?

Where is my lagniappe?

Once upon a time, in the time before massive chain stores and unchecked commercialism feeding a pathetic socialistic agenda, an agenda that embraces Darwinism yet fails, ironically, to realize that it was left behind by that very Darwinism it touts (or even that a system which attempts to keep everyone on equal footing despite evolutionary improvements is a de facto inversion of that very system) there were local stores.  In a community of sufficient size there would be more than one choice of various merchants, like bakers, and thus the merchant would offer a gratuity or reward to faithful customers (or to entice customers, works both ways) and that would be a baker's dozen (13 instead of 12).  Down Louisiana way they call a gratuity offered by a merchant as a reward for faithful custom "lagniappe", a little sometin' extra, cherie.

See, when you have a choice in a free society your dollars and your custom are respected by merchants, or at least they once were.  What sort of incentive do you have to shop at a large chain store?  Lower prices?  Longer lines?  Crowds of people with which you would never associate but for the "convenience" of the place?
What sort of attitude do you get from a restaurant these days?  How many times have you been made to feel as though the restaurant were doing you a favor by selling you their overpriced fare?  They do remember to post that sign that reminds you that they can refuse service to anyone.  They do have a plastic placard on the door that says "Thank You Come Again" but do you get the lagniappe?  When was the last time Dunkin Donuts duked you a Boston creme just because you show up regularly instead of getting the cheap dozen at the Super Wal-Mart?
When was the last time Starbucks...actually discard that sentence because that is pretentious bullshit anyway.
Here in this society of ours we are steadily increasing the socially acceptable minimum for the standard gratuity we give for food service (what is it now 15%, 20%?) but the merchants are not responding in kind.  The relationship between the seller and the purchaser is increasingly disparate and dammit it is wrong.
I want my baker's dozen, dammit!  I want to stop this complete and total lack of concern for people and see if we can reverse the trend.  Sign of the times?  No Vacancy.

I'm not asking for dramatically lower gas prices or anything crazy like that, I just want the merchant to remember that (s)he is not doing me any favors by selling to me and I alone am not doing the merchant any favors by purchasing from them, but that we are part of a symbiotic relationship.  I will do my part by supporting local when I can and passing good word of mouth when I feel it is deserved.  For that don't I, nay, don't we all deserve a little lagniappe now and den?

Once upon a time there was a land called . It was full of people of diverse cultures and languages, but they shared a common trait in that they had an oral culture. Being primarily farmers, these people would pass long dark winter evenings by telling tales that were meant for adults and children alike. These tales were meant to both entertain and frighten and they had meaning. Within each tale was a lesson to be learned, sometimes multiple lessons. These tales rarely ended happily.
Then one fine day the oral culture was supplanted by a literary culture and many of the people were no longer farmers. This was okay because the tales continued to be told, and although the various people lived in different lands and spoke in different tongues, the tales were all very much alike in all the important points. And one by one the tales were written down by different authors and some of the authors changed the tales, or perhaps they simply heard different versions. No one can really say to this day.
One fine day a new, magical land was discovered and they called it . And  never had an oral culture to speak of, but that was okay because people from all over Europe came to  and brought the tales with them either in memory or in print. And time passed and the green land of America blossomed until one day it was determined that the tales and their lessons were no longer proper and so the tales were changed and new versions of the tales were printed. And the children of  grew up happy in their ignorance and they too had children and their children had children. And like their fathers and mothers before them, they too thought the tales were a bit too much for the youth and decidedly unmarketable given the globalized community that the green land had become, and so the tales were changed again. And eventually the children grew up and never knew that their tales had been changed to make them safer for developing minds and more marketable for media conglomerates run by anthropomorphic rodents in short pants. And first Le Petit Chaperon Rouge and then Rotkappchen disappeared until all the children had left was a syrupy happy ending. And thus did childhood extend ever until death and adulthood was hidden away for ever. And they all found out one day that there was no happily ever after. Too bad they weren’t prepared for it.
Heed this lesson and keep your pumpkins lit.
Posted by Rook Wilder at 8:44 PM 4 comments

Just finished watching the first episode of the season premiere of Falling Skies on TNT.
Still a great show.
Looking forward to this season to see the story, well written I might add, unfold.
Yay!
Posted by Rook Wilder at 8:34 PM 0 comments

Entwined and Verbolten...disappointment at the Gardens

Frau Punkinstein and I ventured forth to Busch Gardens this Saturday (16 June 2012) with our friends the Cains to enjoy our first BG trip of the season.  There was much to recommend a trip to BG and as our friends have a young daughter I was able to experience portions of the park I had never seen before, such as Dragon Land or some such.  It's a kid thing.

Times change, tastes change and it is important that parks change with them.  Disney updated POTC to conform closer to the films with a disregard for tradition and quality so flagrant that you'd have thought Johnny Depp animatronics were on sale that year.  Should not Busch Gardens also change with the times?

Of course they should? 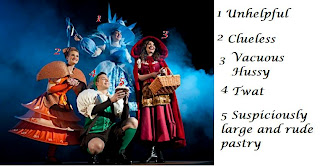 For as long as I can remember the Festhaus in the Germany section has featured good food at reasonable prices and average beer at premium prices and topped all of that off with an Oktoberfest polka show.  The show, kitschy but fun, fit the atmosphere and environment of the zone.  Starting last year BG remodeled Germany a bit turning their more Bavarian side of Germany into a full Oktoberfest section.  This was a nice touch as a beer and pretzel shop opened with some truly tasty selections.  This year they continued the trend by changing the decor in the Festhaus and replacing the polka show with a new fairy tale inspired show called Entwined.  With Once Upon a Time on ABC and Grimm on NBC this seems timely and topical.  Entwined is a show that, well, entwines several traditional fairy tales into one show where Red Riding Hood and Hansel and Gretel get lost in the woods and an evil queen looking like a peppermint bedecked version of Malificent entices them with song and sweets and the good fairy godmother is about sodding useless.
It sucks.
It is charybdic.
The musical selections are Disneyfied versions of pop songs performed semi-competently (the evil witch's cover of Willy Wonka's classic Pure Imagination song was particularly insipid) by the cast held together by one or two lines of weak dialog.  The Big Bad Wolf looks like a basketball mascot in purple and gold lederhosen (a Minnesota Vikings fan no doubt) and the three bears look like teddy bears.  The gnomes have no beards and the dancing gingerbread men...well at least they were creepy.
The whole show really is an insult to both the source material and musical theater everywhere.

I'd rather have my nuts slammed repeatedly in a door than have to endure it again.  I'm all for a fresh show, but it is entirely inappropriate to the setting and the world of good taste. 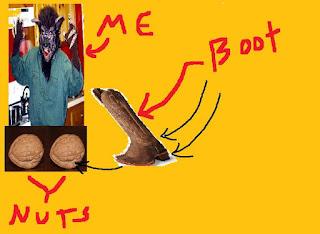 Then there is the Verbolten, BG's newest roller coaster experience which took over the real estate from the Big Bad Wolf which was taken down due to being too old.  Verbolten is a pun of sorts, a play on the German word verboten meaning forbidden.  If I'd had my way, and I did not, replacing the beloved Big Bad Wolf would have been verboten.  The Verbolten is a multilaunch coaster that reaches a top speed of 53 mph and is themed as an automobile tour of the Black Forest with attendant spooky-weird effects.  The queue is impressive being decorated with vintage televisions, luggage, maps and touring items.  The backstory is told through the running loop on the televisions and the setting has many auto related features.  The coaster cars are built to look like an extended car as well.  The majority of the ride takes place in a dark tunnel (building) with psychedelic multihued blacklit leaves and such plastered around the walls.  The high point is when the car stops dead in the dark and then the entire track drops several feet.  Exhilarating but ultimately disappointing, I'm afraid.  The ride has 3 different themed effects, but I experienced only one (and sadly it was not the Big Bad Wolf theme).  The reason I find it so disappointing is that the ride does not do justice to the theme.  Now that coasters are themed so thoroughly with interesting queues and immersion tactics I expect more of a full immersion ride experience.  The Verbolten tries but it fails.  Space Mountain with its old projector effects on the walls or Big Thunder Mountain Railroad with its canyon walls and old west feel provide far more immersion than does Verbolten.  The ride it replaced, the Big Bad Wolf, whisked riders through a German hamlet as the sounds of wolf howls accompanied the ride.  As a suspended coaster the Big Bad rocked and swung with the track.  It was a great coaster and ultimately a more satisfying ride to me.
But I might be biased.
I guess taking the Big Bad Wolf out of Germany was why they ended up with that neutered cartoon wolf in Entwined after all.

Till next time keep your pumpkins lit.
Posted by Rook Wilder at 10:56 PM 7 comments