And Now...The Return of WHAT IS THAT WIZARD DOING 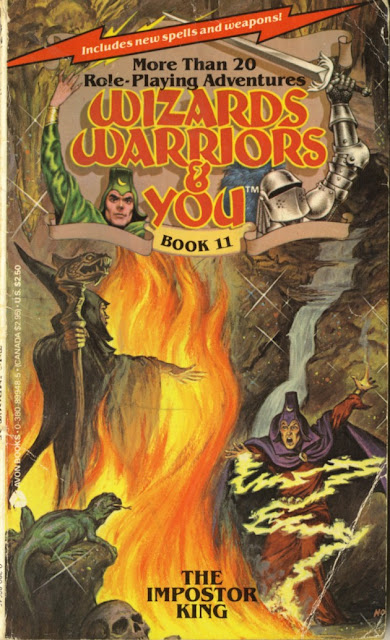 Wizards Warriors and You, book 11, The Impostor King.  King Henry has been replaced?  By an impostor?  Only our heroes can solve the mystery and make the world right again...but not without YOU.  Sounds like I should write copy, does it not?
So what is going on?
We have an evil wizard (we can tell he's evil, he's wearing black robes) in the foreground while our Wizard, again in his trademark red and purple, is doing some serious casting, a forked bit of energy flying from his outstretched right hand while a bit of fire comes from his upheld left.  Wizard yelling and surprise (or panic) face.  This is full on wizard warfare.  Is that a protective shield of fire the evil wizard has created or is he perhaps coming/going in style?  Surely it could not be the results of our heroic Wizard's tiny flame hand, could it?  I've not thought of Wizard as a bit of a Gandalf, but you never know.

The evil wizard dragon head staff is a nice touch, especially as we never see old Wizard with a staff (but swords, yeah, he'll swing those around all day).  The totally gratuitous lizard in the foreground looks on with malicious disinterest (if such a thing can even exist).
It's entirely possible that I'm reading this all wrong.  Maybe this is like Wizard Fraternity hazing and Wizard is having a friendly sort of conflict with evil wizard.  Like Evil Wizard says, "Dude, I'll cast a spell and you cast a spell and if your spell can't beat mine I teabag you."
So Wizard is, basically, realizing that a set of balls are quickly coming his way because he chose a conflagration level freshman spell and Evil Wizard (or Todd, or even The Toddster, and yes, sometimes THE TODDMEISTER) had figured every frosh does that and cast his Protection From Wussy Frosh Fire Spells at junior level.
See that face above?  That's the look of fear in eyes that are about to be crossed from staring at a sweaty taint.
So what's that Wizard doing?
Going to his happy place.