The Call Waiting of Cthulhu

Okay, so you have stories penned by a paranoid social misfit in the beginning of the 20th century that are weird fiction (or science fiction or horror fiction or science fantasy) and they usually involve some person being driven insane from gathering the merest glimpse of the whole of reality in its 16 dimensional spaces, a situation which makes them an unreliable narrator at best, and they aren't even very good and somehow this becomes the basis for an entire pop-culture of douchebaggery.  That about sums up my thesis here.
From Chaosium's Call of Cthulhu to Fantasy Flight Games Arkham Horror, Mansions of Madness, and Elder Sign there is something fundamentally wrong with fans of the genre.  By this I mean that I wish to ask fans of Lovecraft if they have ever actually read the man's work.
Case in point: A friend of mine was in a bookstore, which is surprising enough in this day and age, and overheard a young man commenting loudly to his female companion that the bookstore was in error because they put the Lovecraft works in Science Fiction rather than Horror where it belongs.

Oh really.  Is that what you think, sparky?  Well the fact is that Lovecraft wrote Science Fiction.  Or Weird Science Fantasy, if you prefer.  I have a list of reasons why this is but let me break them down to these:
1) The bulk of his work features entities from beyond the stars.
2) It is not in the least bit scary.
3) We weren't calling it Science Fiction when he was writing, but honestly, it is.
4) Okay, it's not all Sci-Fi, but the roots are mostly Sci-Fi.
5) Science Fiction and Horror have always been evil twins anyway.  Where you see the one, the other is usually nearby, probably waiting to kill you.  And wear your skin as a hat.

That wouldn't even bother me.  What bothers me is how much geeks like Cthulhu.  To the point that they act like the thing is their best friend.  He's become some sort of guard dog and badge of geek honor all rolled into one.  On the least offensive side this is a debasement of the source and on the worst side it is the sort of thing people do to show how "unique" they are with overtones of shock and offense.  Like when people pretend to be Satanists to annoy Christians who are not strong in their own beliefs.  It is douchy.  Stop it.
So what we have, shown above, is a thing beyond human comprehension, summoned from the very depths of a man's neurotic nightmares (seriously, the man had issues, go read his bio some time) showing his trepidation and fear of, among other things, the infinite universe (interestingly he uses the sea as a metaphor for this in Call of Cthulhu) being reduced to...
Yes, fuzzy slippers.  H.P. would vomit to see this.  I guarantee it.  Like Poe, Lovecraft's writing reveals much of the author's own internal struggles with life and fear.  H.P. believed in the relationship between author and reader (he reportedly did not like adaptations of his work for radio as he felt it destroyed the dramatic tension and personal relationship that made the horror work-paraphrased from the introduction to the Chaosium Call of Cthulhu RPG, 3rd edition, I think).  What then would he think of this: 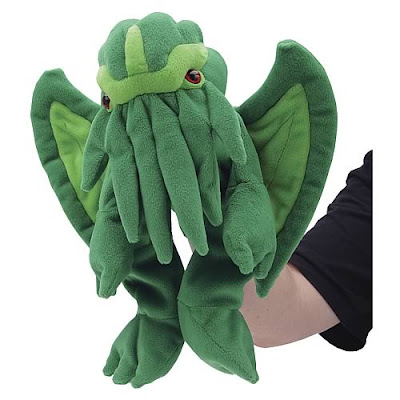 Personally I put old Squid-Face in the same group as Freddy Kruger for his pop-culture appeal.  I don't understand a human mind that enjoys misusing the monster.  Hey, I get it, we love our monsters, but they still need to be monsters and if not monsters in the traditional sense, as least still monstrous, dig?  I love The Munsters and would certainly hang out with Herman and his family, so maybe I am off-base with this Cthulhu pop-culture hatred.
I think much of this is aimed at gaming anyway.  When you play a game where a being beyond space and time shows up and you shoot it to death with a tommy gun I think the whole thing has gone horribly wrong.  When we make the Frankenstein Monster into a friendly thing at least it was not designed from the beginning as an unfeeling cosmic horror (again with that word...it's not scary).  We were meant to feel a sense of pity for the monster from the start.
So that's my thing.  Cthulhu for president and plush Cthulhus and all of it.  It's just silly.  Playing an RPG, video game or any Mythos product where you can shoot dead a Cthonian or a Star Spawn is taking away from the very thing you profess to love.
Sad, really.

Yes, I did just listen to Josie Cotton

What a day.
I realize that soon I will need to actually post some holiday horrors and such, being that the season is nigh upon us, but today I felt a bit odd.  Off.  Not bad, just not my normal feeling.  This was probably because I knew I had a 4 hour conference call coming up from noon to 4, but then it was over by 1.  That throws everything off.

On the one hand (the right hand) I've been very concerned about wizards of late.  Like all week.
On the other hand (the sinister one) I've been having the weirdest songs running through my head all week.  I can't listen to music at work due to diverse reasons that I shall not reveal.  I have been listening to a novel in my car.

So I got home and thought, "You Tube!" then I listened to "Johnny Are You Queer?", which lightened the mood a bit.  Of course then it is a slippery slope into the 80's innit? (Some of you youngsters might not know what I am talking about; sit down in the rockin' chair and I'll tell you a tale of the gawdam 1980s)

Where does it end?  Am I to end up in some sort of Pat Benatar  binge?
Will I Devo?
Is Oingo Boingo in my near future?
I mustn't Flock.  I mustn't.

Sometimes the metal just leaves me.  I am bereft of Metal.  Sometimes I've no grease and I don't feel like the sounds of twang.  Let's face it, I have to surf the New Wave, no matter how old it is.

It occurred to me that my posting of BGW's reply would be better in context.  Below is the e-mail I sent to them the reply to which is in the post below.

Dear BGW,Today my wife and I decided that we would not be renewing our annualpasses to Busch Gardens Williamsburg.  As Virginia residents, my wifea native, we are most unhappy with the current trend we see at BGW.  Ihave been following the BG official blog via the BG website and Irealize that others, many others, share our feelings.  The currentquality of the park, its rides and shows, has fallen far from the barset in previous years and we no longer desire to be associated withit.  Despite living within 30 minutes of the park, we no longer seethe value in holding passes of any kid.Our list of complaints are as follows:1) The change to the Festhaus has not been for the better.  Thingsmust change, certainly, but the Entwined show is a poor replacementfor the Oktoberfest show.  The costumes are substandard, the singingis barely adequate and the plot, such as it is, is vapid.  I took a 3year old to see it and she was bored by the entire show with theexception of the bears.  Children have their places at BG.  Insipidchildren's musical theater belongs in the Sesame area.2) The Verbolten is a poorly executed ride.  With such a show buildinga much better presentation could be done, and yet it leaves much to bedesired.  The worst aspect is that the show building takes away fromthe coaster.  Part of the thrill of a coaster is the feeling ofmovement produced by rushing wind, the anticipation of the drop youcan see and the visual effect of the world moving past at blurringspeeds.  The show building denies the senses that enhance a coaster,but then it also fails by providing weak visuals and auditorystimulation.  The trick of the eye effect of DarKastle is wonderful,yet the Verbolten does not even produce that and it moves faster.  Apoor, poor replacement for the beloved Big Bad Wolf that you murdered.3) Howl-O-Scream 2011 was a major disappointment.  The child-friendlychoice to have scare zones rather than the scare everywhere turned theentire event into a waste of time.  Halloween is supposed to a be abit scary, even for children.  That is part of its appeal.  If parentsare concerned about their children then can certainly leave the parkby 6 PM.  Ruining everyone else's good time for the sake of a fewoverprotective parents (who aren't going to spend money anyway) is afoolish and insulting decision.4) Monster Stomp...gone.  2012 Howl-O-Scream is already off to a badstart to us.  If you insist on taking away our entertainment, thenremoving the appeal of Howl-O-Scream, and subjecting us to enslavementto a child-worshipping cult, why should we patronize yourestablishment?5) The trend is toward a kiddie park.  There are plenty of kiddieparks that parents can go to.  As a park BG was a good mix ofchild-friendly and adult entertainment.  It is moving more and more toa kiddie park.  Sadly this will not succeed.  The Disney parks manageto be a great place for children and adults and are far moreentertaining, presently, than BG.  If you attempt to be a Disney youwill lose.  They are just too big and have been doing this for toolong.Thus, if you do not feel we, and those like us, are valued customerswe have chosen to cease to be.
Posted by Rook Wilder at 5:50 PM 2 comments

My Response from Busch Gardens

I sent an e-mail to Busch Gardens Williamsburg some weeks ago explaining my dissatisfaction with the park, the direction toward which I saw the park heading, and explaining that my family would not renew our annual passes upon expiration.
After several weeks' silence I received a reply.  I have printed it below:

Thank you for taking the time to email us regarding your visits to Busch Gardens Williamsburg.  We always appreciate hearing from our guests as our goal is to provide the best in family entertainment.  We especially welcome comments that impact our guests' experiences at the park.

Busch Gardens Williamsburg strives to provide the best in family entertainment, and we constantly work on improving our guest service.  However, we do rely on guest feedback to address any issues or concerns our guests raise.  Please know that your comments were immediately shared with our leadership team for their review and follow-up.

We will continue to listen to our guests and act upon opportunities to further enhance the Busch Gardens experience.  We appreciate your help in this process through the feedback you have provided.  Thanks again for sharing your experiences with us. I hope you will visit Busch Gardens Williamsburg again in the future.

Keep your pumpkins lit (even if the bastards won't).
Posted by Rook Wilder at 9:37 AM 0 comments