So you have character classes like Fighting Man and Magic User and then you have NPCs who do real jobs, like blacksmith or apothecary or even castle guard.  Now it might be that the castle guard is actually a 2nd level Fighting Man, but the blacksmith and apothecary?  No, they are just regular working people.  They are what the adventurers would be if they had to give up their adventuring and get real jobs.  Of course these workaday NPCs do get better at their jobs through practice and training, but PCs have to earn experience by going out in the world and completing quests.  Imagine then that the blacksmith does earn experience, but it is very specific experience.  He learns his craft and that is what he "levels" as he lives his life.  The PCs, however, aren't working or training or practicing.  No, they are going out in the world and having experiences and from this they learn.  This experience might be practical, such as the first time they meet a rust monster and learn what a rust monster does and how to deal with that, or it might be hard to define.  For that there are experience points.  Either way the PCs must go out and find more and more experiences to get better because that is, more or less, their calling in life.

So what has this to do with wizards? 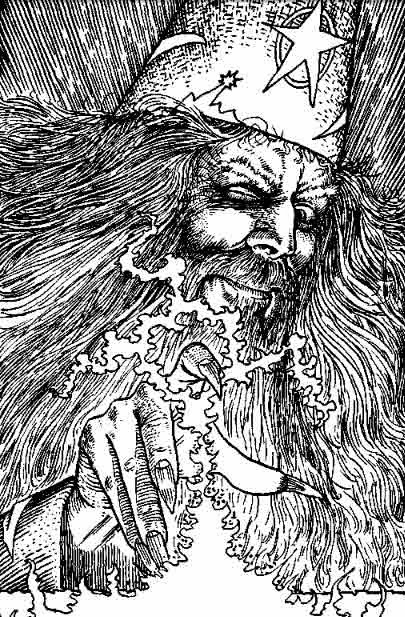 Well traditionally we see wizards in towers (or dank dungeons) full of magical paraphernalia such as candles, tomes, stuffed creatures, magic circles on the floor, symbols all over the place, perhaps cauldrons as well.  Does this bear any resemblance to the average adventuring wizard?

Well, no.  But we know that wizards can research spells and scribe scrolls and brew potions and enchant items, all of which requires an outlay of time and gold, and requires labs and such.  So how is the adventuring wizard different from this other type?

Consider the non-adventuring wizard a "working" wizard.  His job is being a wizard.  He studies magic, focusing on the deeper mysteries of magic for his own reasons such as a thirst for forbidden knowledge or profit.  These sorts of wizards don't gain experience from killing monsters or delving dungeons, but they do learn and study and practice.  They don't bother with weapons or fighting, spending their time amassing libraries full of material, including spell books, but also histories, philosophies and other tomes.  They build labs and research spells.  They are to wizards what blacksmiths are to warriors, creators of the tools used for adventure and action.

Now the adventuring wizard is a different story.  For the adventuring wizard the adventuring is his actual job, not the wizarding.  Think about it; it is the truth.  The adventuring wizard spends the bulk of his time exploring dungeons, trekking through the wilderness and battling monsters.  He does employ magic (at times) to do this, but he does not have the time to simply stop the action and look through his library of magical tomes for the right spell, or to pause in the middle of a ritual (not that he has time to set up and perform a ritual with a horde of bloodthirsty orcs bearing down upon the party) to find the perfect reagent for the spell.  He has to cast a timely spell to blast the orcs or save the party from an earthquake.  He can gain magical knowledge through research but he gets the vast bulk of it from exploration of the world (and plundering of dungeons where a old spell books or some scrolls are found in the treasure horde).  He also has to fight in melee at times and while he'll never be the combatant that his fighter and cleric friends are, he learns about weapons and tactics in a sort of on-the-job training.  For this reason (dependent upon the system) he only has a few key spells ready (or spell points) and often relies on magical trinkets to round out his arsenal.

Certainly, as it was in the old school days, the adventuring wizard can settle down and retire (or semi-retire) and build a tower and spend more and more of his time doing the "working wizard" things, perhaps inventing several new spells that adventuring wizards will no doubt use in their own careers (possibly paying a pretty silver for as well) making legends of the creators.  The adventuring wizard is a more eclectic magic-user than a working wizard who spends his whole time focusing on single goal or a battle mage that studies at some academy to be a mobile siege engine on the field.  Adventuring wizards tend to learn their spells by finding them in old treasure hordes or researching them when they have some downtime and the cash.  Yet they are also more versatile and level faster.  If you are going to play old school you have to embrace this notion of the Swiss Army Wizard, or as a friend of mine puts it "the iWiz...I've got a spell for that".  Sure he won't be turning lead into gold anytime soon, but when you have to jump off the edge of a gorge to escape a rampaging orc horde Feather Fall is a far more useful thing to have than a pocket full of loose change.

And so the Pirate Renaissance draws to a close

Yes, there was a Pirate Renaissance.  It started with the runaway success of Pirates of the Caribbean Curse of the Black Pearl and continued on until about On Stranger Tides when things started to just, sort of, go away.  Now we have NBC's Crossbones coming in 2014 and STARZ Black Sails currently, but trust me this is not a continuation of the Pirate Renaissance.  It is the Pirate Sunset, you see, and these are the last ships we will see for some time.

Now one of the things we saw during the Pirate Renaissance was a large amount of pirate media (e.g. books, comics, films) and pirate games (board, RPG and video) hit the market, not all of them winners.  When it comes to pirate gaming the problem is obvious to me.  Pirates games are, by and large, of the board game ship variety, or treasure hunting variety.  Pirates and RPGs just don't mix well.
Why, you ask?
Well...
RPGs are best with small groups of individual characters, usually playing complementary classes, that can work together in a compartmentalized fashion to achieve a goal.  The wizard has his job, the cleric has her job, the fighter has his job and the thief has its job.  Small teams of 3-6 members allow for the players to work together without too much overlap and to function as individuals.
Pirates are, however, a bunch of sailors on a ship doing pirate shit.  That means robbing, looting, pillaging and so forth.  First and foremost they need to be sailors.  That's your class, mate.  Sailor.
But don't sailors have individual jobs?
Yes they do, but ship's wizard is not one of them and what is the awesome dungeon crawling potential for a carpenter?
Crews tend to be a bit larger than 3-6 members as well.
Then there is the adventure potential problem.  One of the most famous of all pirate stories is Treasure Island and it is a classic of adventure.  Sadly it is a book about a treasure hunt, not a book about piracy.  There are pirates in it, but it is not in and of itself a story about piracy.  POTC:CotBP is also, actually, a treasure hunting story.  Most so-called pirate films are actually treasure hunting films (most I said, not all).
Well is not the gist of any RPG adventure essentially a treasure hunt?
Maybe in the old days of nothing but dungeon crawling, but we've moved past that in gaming.

Okay, so can you not have pirate adventures?
Sure you can, but a whole game about nothing but pirates is going to get boring pretty quickly.  I say this as a dedicated pirate...I mean "pirate fan".
So let's have a pirate class in our RPG.
And again, a pirate is a sailor that takes up a life of sea borne robbery.  His class, if such a thing can be called a class, is sailor.  What special abilities do you want?  Get drunk and still show up for watch?
Actually that's quite useful, but I digress.

There is also this captain problem.  Everyone knows pirate captains.  Of course they do.  Those are the ones history wrote about, but we can't all be Blackbeard.  Hell, we can't all even be Jack Sugarbritches Sparrow.  Indeed most of us are lucky to be Gibbs.  So now that you can't have a party full of captains what do you do?

Then there is the railroad problem.  A railroad adventure is one that offers the players no options or freewill.  They are "on the tracks" so to speak going wherever the GM sends the railroad.  Players tend to dislike that.  What is the ultimate railroad?  A ship in the middle of the bloody ocean.  Not only can you not just get off the train like a hobo nearing a particularly scenic town, you can't change the ship either.  You are basically sitting around waiting for the GM to put another sea monster in your path.  So you make land and do adventure stuff, probably treasure hunting and...congratulations you are not playing pirates anymore.

Now most board games (again not all) about pirates are at the ship level.  Sure you might have the named captains and such and even might fight some boarding actions but the games are about ships, which makes sense because, as we have established, pirates are sailors.  Land pirates steal music.  Not exactly awesome RPG potential, especially since so many bastards are already doing it.
So ships, which is cool for a board game but not for an RPG.  A ship as a character?
Hmmm....
No, no, just leave that behind.

Of course it comes down to setting and a pirate setting must be aquatic.  This can be a problem as well.  How popular is Aquaman?  I know I like Aquaman, but pop culture still likes to poke fun at the king of the seas.  If you are the average asshole who thinks Aquaman is a joke you have no business playing a nautical RPG.  Aquaman is the ideal of the nautical RPG.  Most folks I've spoken to, read the blog of, met, etc. don't want a true nautical adventure.  They want to swagger around acting like a concussed bisexual gypsy saying "savvy" every third bloody word.  Savage Worlds created the 50 Fathoms setting which is a water world (without Kevin Costner).  Sparse islands and no big continents and ships galore.  Yes there are pirates all over the place and yes it is fantasy.  Now who wants to play?
Again popular polling (and reading of internets blogging and reviews) tells me that people don't deal well with aquatic settings.  It's just too alien and people tend to think, "pshaw...water...that's boring."
Except you can't breathe it, can you, smart boy? 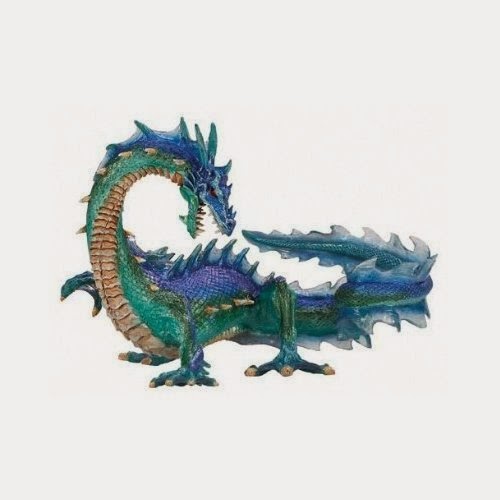 Sea dragon!
Yes, the oceans are full of exciting and dangerous things (like sharks and giant squid and jelly fish) and a fantasy ocean all the more so, but all your lovely plate armor and magic scrolls just aren't going to help.  So people tend to shy away from the aquatic setting.  Oh, it's okay to have the odd game on the water, but the whole setting?  Just doesn't appeal to people it seems.

So this all started as me talking about the end of the Pirate Renaissance and ended up being about why pirate RPGs don't work.  That was me flying false colors, mates.  Very pirate thing to do.